La-La Land Records and MGM proudly present renowned composer Jack Marshall’s (THE MUNSTERS, THE DEPUTY) original motion picture score from the 1958 cult classic THUNDER ROAD, starring Robert Mitchum, Gene Barry and Jacques Aubuchon, and directed by Arthur Ripley. Also featured are selections from additional Jack Marshall scores, TAKE A GIANT STEP (1959) and THE RABBIT TRAP (1959). A Grammy-nominated composer, Jack Marshall was also a brilliant guitarist, as well as a respected record producer. This exciting album assembly showcases his diverse talents – from the high-octane car action of THUNDER ROAD (with its famous ballad by Mitchum and Don Raye) to the personal human drama of TAKE A GIANT STEP and the lightheartedness of  THE RABBIT TRAP – the breadth of Marshall’s work reveals itself to the listener in dynamic fashion. Produced by Mike Matessino and Frank Marshall (producer/director and son of the composer), this special release of 1200 Units, meticulously restored by Matessino, features exclusive, in-depth liner notes by writer Jon Burlingame, a candid forward from Frank Marshall and a personal introductory note from Jack Marshall’s friend, composer John Williams, who performed as pianist on THUNDER ROAD in one of his early Hollywood session assignments. The rip-roaring art design is by Jim Titus. 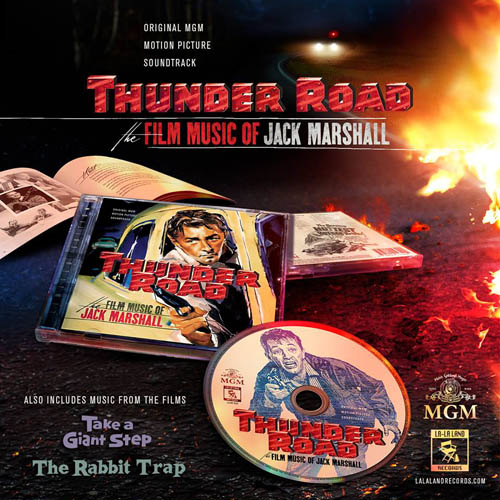 NOTE: THUNDER ROAD and TAKE A GIANT STEP have been restored from the only surviving music elements, located in the composer’s personal archive. Anomalies resulting from the age of the tape sources have been addressed in every possible way, without compromising the integrity of the music, to preserve and present these scores to listeners. The “music and effects” tracks were provided by MGM and were utilized in order to include cues that were not present on the music elements. It was determined that sound effects were minimal enough that it was worthwhile to integrate them into the overall score presentation. Selections for THE RABBIT TRAP likewise came from the “music and effects” track, added so that we could represent all three projects that Jack Marshall scored for United Artists. The track list indicates where sound effects may be present.

BRIDE OF FRANKENSTEIN, THE: LIMITED EDITION